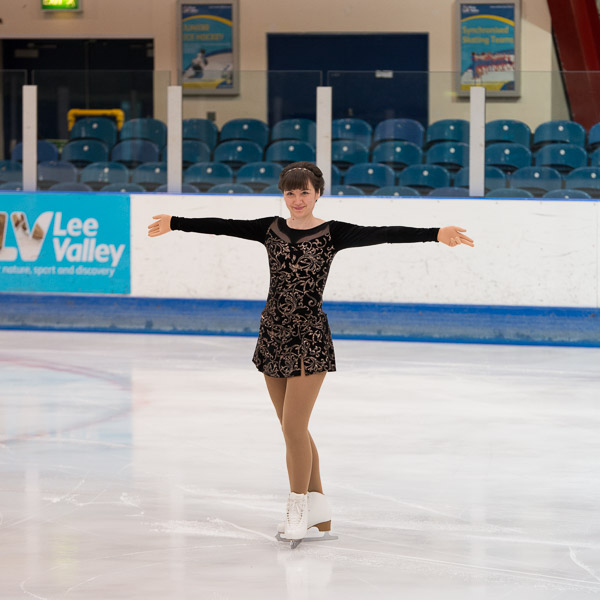 Good performances all round by adult skaters

On 16th August 2015, more than 20 adult skaters took to the ice at Lee Valley Ice Centre for our latest skills competition. It was great to have so many competitors, including a number of skaters who were participating in their first competition. One of the goals of the club is to give people an opportunity to compete in a relaxed and friendly atmosphere, so it’s fantastic that we’re getting a steady stream of both new and repeat entrants!

After the pattern dance categories, competitors took part in four Spin, Jump, Spiral categories. Everyone put in good performances and there were a number of very strong skates, with the top three spots in most categories being hotly contested.

Once the official events were over and the prizes had been awarded, it was back onto the ice for a series of mini challenges — a sort of “party games on ice” open to anyone who wanted to participate (including non-competitors who had attended the event as volunteers), ranging in difficulty from “longest one foot glide” to “loop the loop” (to find out who could do the most loop jumps in combination). The latter was won by David Marston with an incredibly impressive total of 18 loop jumps in a row!

The challenges were good fun and it was great to see skaters of all levels joining in and enjoying themselves (perhaps encouraged by the edible prizes!). We may well repeat this idea at a future event, although we’ll have to think of some different challenges so that people don’t have the opportunity to practise!

We don’t yet know when our next event will be, but please do keep an eye on the London Adult Skating Facebook page for the latest news — we will also circulate information to members via email, so no need to panic if you’re not on Facebook. In the meantime, if anyone has any suggestions for events that they would like the club to run, please do contact us via Facebook or on londonadultfsc@gmail.com